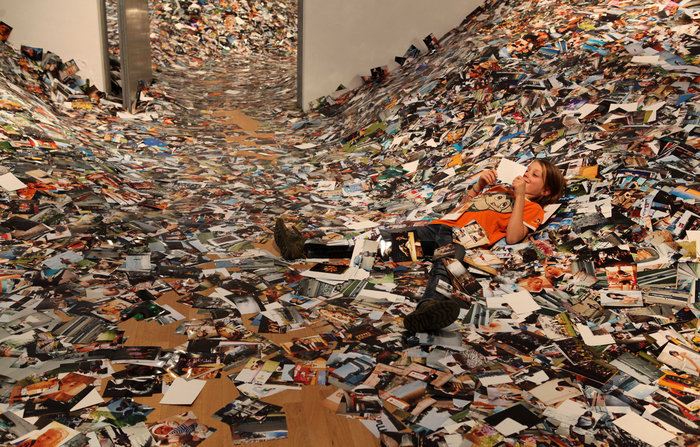 Recently, I came across a New York Times article about a $1,200 domestic drone, whose writer described opening a bulky box, extracting a picture-making flying machine, puzzling through its complex instructions and, ultimately, having a great time. “Oh, my goodness, this thing is fun,” he summed up the experience. And I bet it was.

But because I track stories about photography and visual culture on a daily basis, I’m also well aware of the drone stories that don’t have such consumer-friendly and happy endings. What continually fascinates me, someone who’s worked in the photography field for decades, is that even as picture-taking and photo-sharing become increasingly democratized, impactful, and controversial, not enough dialogue about photography seems to be going on.

This may seem hard to believe. There are, one might argue, ample opportunities—in exhibitions, magazines, journals, blogs, books, courses, and conferences—to look at, question, and argue for the medium. But surprisingly, how photography actually functions in the broader cultural scheme of things—how it is employed, who and what it represents, and why it works so powerfully and well—remains underexplored.

With well over a billion photographic images being made every day, by many people and for many reasons, it is impossible to construct or support any single or seamless story about the medium. (To get a sense of the sheer volume of new images we are generating, see artist Erik Kessels’s installation of all the photographs uploaded to Flickr in a single day in 2013.) Today, photography is used more variously, often, and consequentially than most other visual media. And as photography is being redefined in the digital era, it is redefining our relationships to reality and each other. The pictures and photo-driven narratives that capture attention and go viral, such as the recent spread of and chatter around President Obama’s selfie at Nelson Mandela’s funeral, only begin to hint at how deeply photographic imaging is embedded in and actively shapes everyday life and culture at large.

The fact that photography’s definitions have always been fluid—and its practice and audience broad—has made the medium particularly problematic for art museums. Photography, as Lady Elizabeth Eastlake noted in an 1857 article she wrote for the London Quarterly Review, “is made for the present age in which the desire for art resides in a small minority, but craving, or rather the necessity for cheap, prompt, and correct facts in the public at large. Photography is the purveyor of such knowledge to the world. She is sworn witness of…facts which are neither the province of art nor of description, but of that new form of communications.”

Since its introduction in the 19th century, the artfulness of photography has been cyclically argued for and argued over. Carnegie Museum of Art was, in fact, among the earliest of American museums to pioneer the display of art photography with Photo Secession, the historic 1904 exhibition of pictorial imagery that was organized by Alfred Stieglitz and Edward Steichen.

Throughout the 20th century, more art museums in the United States began to recognize and support the medium, or at least their quite intentionally rarified version of it, by focusing largely on the photographs made as art. But what about all the rest of them? The much-heralded photography boom of the 1970s made it seem as if the medium, a century and a half after its introduction, had come of age. But even that transformational moment failed to calm down the nervousness that perpetually hovers around photography.

With the democratization of digital imaging in the 21st century, and as photography is in the process of being radically reimagined, cultural institutions and art museums in particular find themselves in a curious position. They can move forward on the photographic paths they’ve staked out for themselves or bob in the wake of exhibition and collecting models developed elsewhere. Or—and this is where things get interesting—museums can, in this time of flux, rethink their relationship to and broaden their inquiry into a medium that is re-engineering itself and in the process re-shaping our need for and expectations of representation itself.

It is Carnegie Museum of Art’s decision to take the latter course that made me jump at the chance to become one of the first round of “agents” to steer the early programming and course of the Hillman Photography Initiative. The word agent (I’ve got to admit) at first sounded like a strange way to describe what we were or might do. As it turns out, it’s pretty accurate. If photography is increasingly understood to be a powerful agent of cultural and social change, then why not sign on to investigate and advocate for that?

Initiative, too, is an interesting word, one that suggests ambition, reassessment, a desire to forge ahead to make new things happen. That’s what makes working on the Initiative a unique opportunity for the first small group of us—artists, curators, writers, and a technologist—who’ve been invited to bounce ideas around and create a year’s worth of innovative programming. And once we’ve done that, another group of agents will be recruited to rethink photographic imaging and priorities their way.

At a time when the field of photography is being radically transformed, and as many museums choose to wait things out or host decorous and defensive discussions about what’s happened to photography, the Initiative and the Carnegie Museum have more boldly staked out an active leadership position in the field. What an honor to be a part of that. And, what a relief.