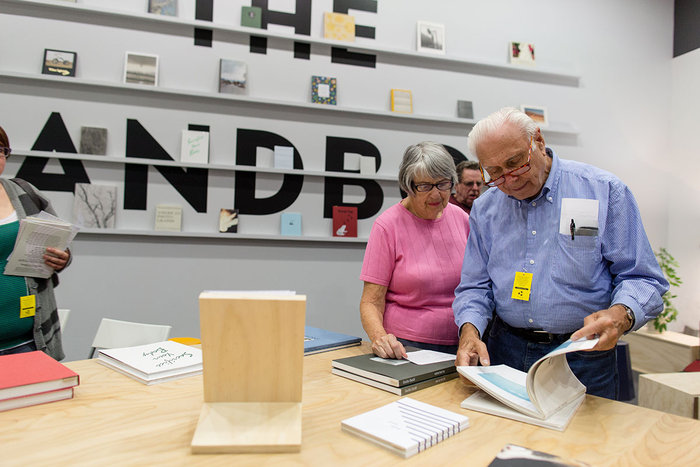 Last Monday, The Sandbox: At Play with the Photobook, an installation that transformed the Coatroom Gallery into a reading room and public forum on the photobook, ended its three-month run at Carnegie Museum of Art. Facilitated by artists-in-residence Melissa Catanese and Ed Panar, who own Spaces Corners, a Pittsburgh bookshop dedicated to photography books, The Sandbox offered visitors an immersive look at the medium, while at the same time sharing the work of both emerging and established photographers who often operate at the intersection of experimental image-making and modern photography.

“There’s a density to these books,” says Panar, “each one is like a gallery exhibition.” He motions with his hand to a plywood table in the center of the Coatroom Gallery that displays rows of neatly ordered photobooks—most of which are little-known to the general public, but often highly coveted among photography enthusiasts keen on high-quality, limited-run publications that express the personality of a given photographer or moment in time. Salad Days, for example, a zine-like photobook that chronicles Panar’s own teenage years at a vocational high school in Johnstown, Pennsylvania, acts as a time capsule of American culture in the early 1990s. Shot with color film, the photographs in the book capture an awkward yet intimate view of adolescence that goes beyond Panar’s personal experience, with many of the images evoking an almost-tangible sense of time and place.

In the world of the photobook, where Panar is both an author and publisher (he and Catanese publish titles through Spaces Corners), audiences are hungry for innovative, well-conceived work. Publishers such as Dashwood Books, Mack, Aperture, and Little Brown Mushroom, to name but a handful, are known for championing photographic work that is equal parts progressive and conceptual; experimental and technically proficient. And in this realm, photographers like Alec Soth, Roe Ethridge, Paul Graham, and Eline Mugaas are just a few marquee names—not only because they are prolific, but because they are constantly playing with the idea of how to package, present, and disseminate their work.

“The best books change as you change,” says Panar. “They reward repeated viewings.” Giving examples of some seminal titles, he cites Robert Frank’s The Americans, Walker Evans’s American Photographs, and Robert Adams’s The New West. When asked for more contemporary titles that have had a similar impact, Panar points to Christian Patterson’s Redheaded Peckerwood and Paul Graham’s A Shimmer of Possibility.

Like any well-written novel or work of nonfiction, a powerful photobook has a tendency to draw you in, whether the subject matter is honest or insightful, fun or irreverent. From its inception, The Sandbox—one of the Hillman Photography Initiative‘s inaugural projects—was viewed as a hands-on way for the public to engage with the expansive library of photobooks assembled by Catanese and Panar.

“We wanted the experience to be welcoming and playful,” says Catanese. “For us there is a lot of joy in discovering photobooks, and we were so happy to be able to provide a space for this encounter to happen here at the museum.”

As a way to organize the collection of photobooks on display, Catanese and Panar decided on six themes—Puzzles, Social Studies, Time and Place, The Life of Objects, Archives, and Science Fiction and Dreams—which were rolled out on a biweekly basis during the exhibition. The themes worked as a way to build instant collections by topic, the way a recommended reading display might function in a more traditional bookstore environment.

“The curation that [Melissa and Ed] did based on themes was very useful,” says Kalev Erickson, Commissioning Editor at the Archive of Modern Conflict, an enigmatic photography collection housed in London. “It opened peoples’ eyes to new books and work produced under similar themes that might otherwise not be apparent.”

Erickson, who is also editor of the book More Cooning with Cooners, visited Pittsburgh from his native London this past June to give an artist talk at the CMOA Theater. His presentation, which centered on theme of “Archives,” offered those in attendance a unique take on the role that archives play in the creation of photobooks.

“In a wider sense,” Erickson says, “I feel that this [thematic] approach to the curation of the books [in The Sandbox] really helped provoke thought and discussion around photography to an audience not necessarily used to viewing the medium outside of the traditional sense.”

Introducing museum visitors to the photobook was a key aspect of The Sandbox, but broadening the discussion was equally important, as noted by Erickson. As a result, the Hillman Photography Initiative hosted a series of other events intended to offer deeper insight to the books on display in The Sandbox installation, and spur ongoing discussion of the photographic image. This past May, for example, Oslo-based photographer and zinemaker Eline Mugaas spoke with curator Tina Kukielski on the subject of the recurring themes of desire, melancholy, motherhood, nudity, and lonely men that appear in ALBUM#, Mugaas’s popular zine series. In June, writer Nicholas Muellner gave an artist talk focused on the relationship between photography and experience, and how the intersection of the two can evoke a distinctive sense of place. And later that same month, the film Somewhere to Disappear, which follows photographer Alec Soth on his two-year journey to encounter individuals who have left the beaten path of American life, was screened in the CMOA Theater.

“Any great art is a catalyst for conversation,” says Panar, noting that The Sandbox spurred a host of thoughtful discussions during its run—not only from the artist talks hosted in the Coatroom Gallery, but from the interaction with museum visitors as well. It’s a development that both Catanese and Panar greatly appreciate, especially given the time and effort the pair have invested as advocates for the medium.

“When [Melissa and I] moved back to Pittsburgh from New York several years ago,” Panar says, “we felt like we were missionaries for the photography book.” With The Sandbox offering one of the few places between New York and Los Angeles where the public could browse such a collection of photobooks, the installation represented a culmination of Catanese and Panar’s efforts.

Though The Sandbox installation has ended, Catanese and Panar’s other project for the Hillman Photography Initiative, A People’s History of Pittsburgh, an online project that invites visitors to share images from Pittsburgh’s past, is ongoing through December.

“It’s always such a treat to have complete strangers come in and share some of their personal and family photographs with us,” says Catanese. “We love to hear all of the stories and meet the people who have the photographs, as even the most ordinary snapshot comes to life once you have a sense of the world that they came from.”

Since the opening of The Sandbox installation in May 2014, it played host to A People’s History of Pittsburgh, projecting an ever-growing slideshow of images on the wall in the Coatroom Gallery and inviting museum visitors to share their own personal and family photographs. As a way to open access on a wider scale, a series of scanning days were held throughout the duration of the exhibition, with Catanese and Panar helping visitors to scan and add their photographs to the project’s online collection.

“A People’s History of Pittsburgh is the first time I’ve dealt with such a democratic method of recording and archiving culture,” says photographer Jake Reinhart, who submitted a series of his father’s undeveloped negatives to the site. “What I really respect about the project is that it opens the doors and windows; it allows a lot of people to talk about our culture as Pittsburghers.”

As someone who’s often been curious about the idea of who gets to determine what a city’s history or culture is, Reinhart views the project as a way “to speak to the next generation on our behalf.” Encouraging this type of discussion, of course, is a core goal of the Hillman Photography Initiative, and a key aspect of the People’s History project. Not only will the growing collection be archived online, but select images from the project will contribute to a new publication, edited by Catanese and Panar, that’s slated for release in 2015.

“With A People’s History, we have no idea what kinds of photographs we are going to end up with in the end, and the element of surprise and discovery is part of the joy for us,” says Catanese. “We know there must be an endless amount of incredible photographs out there in peoples’ shoeboxes and dusty old albums, and we’re excited to see what turns up.”