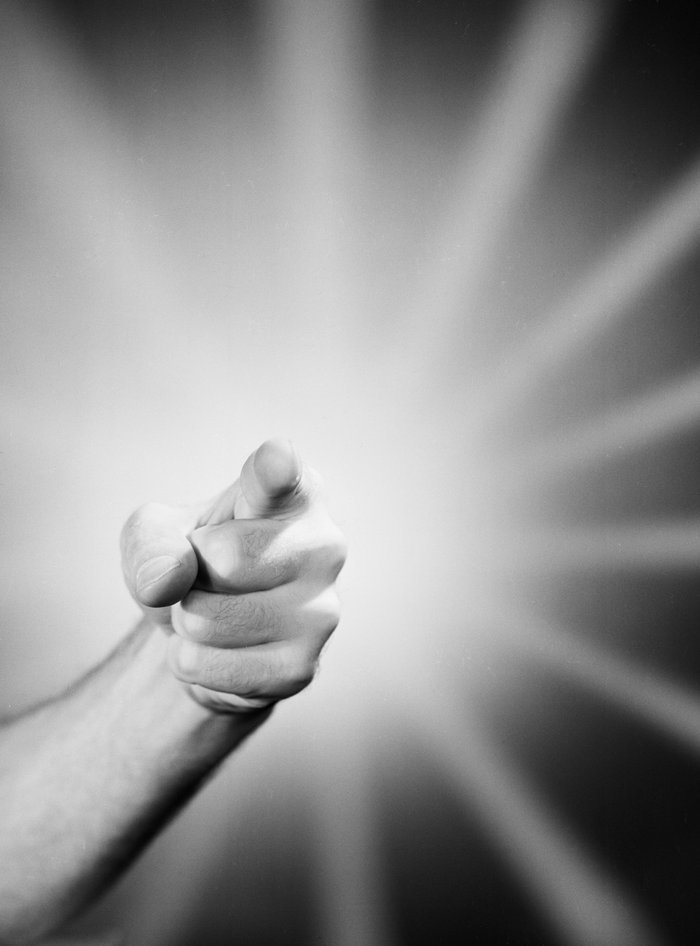 August’s This Picture photograph has been, to my mind, one of the most enigmatic we’ve had so far. Depending on how you see it, the pointing finger can be accusatory, celebratory, or just plain puzzling. The responses we have received from all of you have risen gamely to the challenge of unpacking the meaning and associations of this picture. The four responses that stand out to me as the most intriguing are:

Congratulations to George, April, Mike, and Becka! You are this month’s winners of the Program Manager’s Picks contest. Your prize (coming soon) is free admission to an upcoming World Premiere of The Invisible Photograph, which can be redeemed at one of our two remaining screenings, including our next one on September 19.

And to all of our anonymous submitters out there, I’d just like to say: don’t be anonymous! We can only publicly recognize those of you who choose to step out of the shadows and stake your claim as This Picture correspondents. So, go ahead, lift the veil of anonymity and automatically enter yourself in the monthly Program Manger’s Picks contest. You could be one of our next winners!

Don't Be Written Out of (Pittsburgh) History!

That’s right, folks! If you want your picture to be considered for inclusion in the A People’s History of Pittsburgh print publication (coming April 2015), you must submit by December 31, 2014. Although the online project will remain open to submissions through April 2015, Melissa Catanese and Ed Panar, the artists-in-residence leading the project, will select their favorites by the end of this calendar year for inclusion in a print edition of People’s History. As Ed Panar once said, “Don’t be written out of history!” Submit now.

Our two highlighted themes for submissions in August were football and rivers. I lightheartedly entreated all of you in my July Snapshots post to find photographs of Three Rivers Stadium to create a “perfect synergy of football and rivers.” Lo and behold, we got this heart-rending shot from Robert Wells that marks an event any Steelers fan worth their salt will remember.

This next photograph, submitted by Linda Willhide, is a beautiful black and white moment that recalls the lazy summers of childhood. The composition of the shot is perfect, with the child on all fours towards the left anchoring the image in the foreground while the gently rising slope and dark trees give a sense of depth and receding planes toward the back.

Margaret Boylen and Rick Birek, who submitted some lovely shots last month, appear again with this one at 27th Street and Jane Street in the South Side. This visually arresting photograph immediately grabbed my attention with its bright, contrasting colors and the way its insistent vertical elements engaged with its horizontals. But the keystone detail, the one that I think holds the entire image together, is the women seen in profile at the bottom of the image. Despite the fact that she’s not looking at me, I am drawn to her: she simultaneously leads me in and anchors me in the photograph’s space and time.

In September, you’ll see some targeted calls to action via social media for you to submit photographs to the project. Last month’s themes were football and rivers. This month’s are Labor Day, selfies, and bridges. I challenge all of you to find a way to combine all three. Perhaps a selfie on a bridge while celebrating Labor Day?

The Sandbox: In Memoriam

On July 28, our beautiful installation in the Coatroom Gallery, The Sandbox: At Play with the Photobook, closed its doors forever. However, fear not! You can read a wonderful text looking back on the three month artist residency with Melissa Catanese and Ed Panar of Spaces Corners here.

What’s around the corner?

Looking ahead, we can’t wait for Friday, September 19, which marks the World Premiere of Part 4 of The Invisible Photograph documentary series. From the project that gave you behind-the-scenes access to the Corbis image archive, the discovery of Andy Warhol’s lost Amiga experiments, and the techno-archaeology of the first photographs of the moon, comes Discarded: Joachim Schmid and the Anti-Museum. This piece delves into the work of Joachim Schmid, a German artist who has spent the past 30 years roaming flea markets and city streets to retrieve photographs that have been discarded by their creators and users. See how he has pieced together an anti-museum of over 1000 images that would otherwise never have been seen, and created a new context for their visual consumption. Join us. Advance registration saves you $5 and includes a drink ticket!