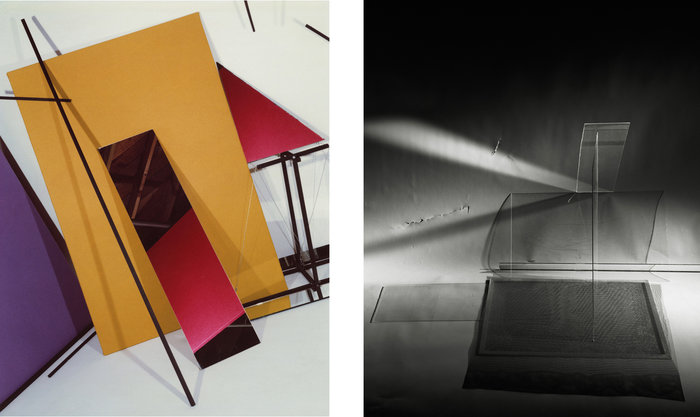 Curation can be a kind of storytelling—it is a chance to narrate or reframe an artist’s practice, but it is also a conversation. For the past two years I have been spending time with the artist Barbara Kasten as we work together to mount her first museum survey. The show, opening at Philadelphia’s Institute of Contemporary Art in February 2015, will bring her most recent large-scale photographs together with her well-known images of studio constructions and architectural interventions, as well as her seldom-seen experiments in other mediums.

I initially became interested in revisiting Kasten’s work about six years ago when there was a renewed excitement around photographic abstraction. As a younger generation of artists began to find inspiration in the works she had produced over thirty years ago, I wanted to learn more about the ideas and processes that had informed her practice and was prompted to invite her to speak at the museum where I was working at the time. Now that I know her better, I increasingly understand her photography within a wider and more complex context. Working in her archive I learned about her forays into fiber and set design, and I became familiar with her own intergenerational explorations, namely a 1990 documentary, produced through a collaboration with art historian Deborah Irmas, High Heels and Ground Glass, which presents interviews with five women photographers working in different areas of photographic practice who at the time were in their seventies and eighties.

As a young artist looking for role models within the European avant-garde, Kasten became intrigued by the photographs of mirrored surfaces and nonrepresentational imagery by Florence Henri, an artist whose work helped usher in the era of the New Vision, in which the camera portrayed the abstraction of modern day life via startling perspectives and refracted viewpoints. Although by the late 1970s the history of modern photography was becoming increasingly codified, she found that there was a lack of substantive information about the women she admired and wanted to learn about their approaches to photography and how being a woman in a male-dominated field had impacted them. Realizing that many of these photographers who had played a role in the heyday of the early 20th century might still be alive and able to tell their stories, she applied to the National Endowment for the Arts with the aim of acquiring funding to videotape them.

Upon learning of her NEA award in 1980, Kasten immediately wrote to Henri to inquire whether she could meet her in person. She explained, “As an artist and instructor of photography, I have felt the need and desire to identify my own roots in the art of photography and also present this to the students I teach. Although women have recently been gaining recognition for the importance of their roles in the history of photography, I would like to facilitate the acknowledgement even further” (from a letter from Barbara Kasten to Florence Henri dated April 8, 1980; Courtesy of Barbara Kasten’s archive). By the time Kasten met with Henri in Paris, she was too ill to be recorded, but the experience was encouraging enough for Kasten to return to the States and begin reaching out to other photographers in an effort to document their stories. Working with Irmas she set out to interview women that represented different areas of the field: from Louise Dahl Wolf‘s iconic fashion spreads in Harper’s Bazaar and Maurine Loomis’s headshots of glamorous Hollywood stars, to Lisette Model‘s fresh images of New York street life, Gisèle Freund‘s portraits of iconic European intellectuals, and Eiko Yamazawa‘s colorful abstractions. In their homes and studios from Los Angeles to Osaka, each artist reflected on her individual philosophy about photography and offered insights into her autobiography and how World War II had brought both opportunity and devastation.

Of course, this was all done in an era before mainstream digital technology and affordable editing software had become available, and so, before Kasten and her collaborators knew it, they had embarked on a project ten years in the making. The final documentary thus provides an invaluable record of the artists and their personalities, and continues to be shown in classrooms to this day. At a moment when intergenerational dialogue is increasingly central to artistic and curatorial activity, and as the history of art is continuously being expanded and rewritten (thankfully), we can now access the numerous hours of unedited footage—acknowledged as an important document in their own right—in the Center for Creative Photography‘s archive, where they await a new generation of artists and scholars to become acquainted with these remarkable women in their own words.