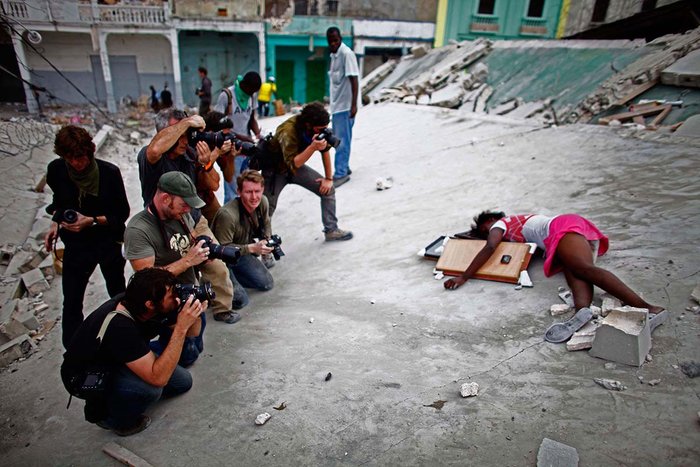 When Fabienne Cherisma was shot and killed by a police officer for looting in the aftermath of Haiti’s cataclysmic earthquake of 2010, Nathan Weber was there to capture the scene on camera, as seen in January’s This Picture selection. But Weber’s photograph shows us an event that seems tragic on more than one level, fanning the flames of an old controversy: When should a documentary photographer put down the camera and lend a helping help?

In his own commissioned response to this photograph, Fred Ritchin challenges the trope of the photographer-as-vulture, a sensation-seeker who tries to make a buck on someone else’s misfortune. Maybe the real issue, Ritchin argues, is the way the photograph is being used. When a single photographic moment is made to stand in for an event of lasting duration, we lose the benefit of the full story, the before-and-after that brackets every newsworthy event. And, perhaps unfairly, that single and oft-heralded decisive moment gets blown out of proportion as a result. Given the possibilities of the digital environment, it is now easier than ever to provide additional context to the interested reader. But the impact of the single iconic photograph under a front-page headline – whether in print or online – is undeniable. It’s a useful tool for selling a story. And since the photographer often has little control over how his or her image is placed in that story, is the entire news media industry at fault for making a single image stand in for a nuanced event? Or do we, as digitally-savvy readers, have a responsibility to seek out the relevant context and build a fuller picture for ourselves?

Perhaps due to the controversy swirling around this image, responses to This Picture soared on social media this month. I enjoyed reading many of those responses on Twitter, especially because many of them came in the middle of rapid-fire digital conversations between users. I extract some here, to add to the richness of this month’s debate:

On our own website, I found the four responses below particularly compelling.

Michael Penn responded with a provocative photograph, stating “The exploitation is usually done by those other than the photographer. Events like this are happening before your eyes and it’s the job of the photographer to capture it. Not to do so would create a false reality.”

Similarly, Matt Herrmann notes, “When you make the photographer the criminal, you are ignoring the root of this problem.”

However, Kate Fowler digs a bit deeper and challenges Fred Ritchin’s argument, asking, “How should we engage digital tools to add the necessary context? Or, should we drop this discussion about photography’s ability to provide us with anything other than an illustration of an idea?”

Shannon Phipps responds with a photograph of protesters at work, along with the statement, “People taking action against the evil of human beings speaks louder than any documentation of such action.” But the visual power of the photograph she submitted tells me more about the protest than her words… so perhaps taking a photograph can be as effective as “taking action?”

Congratulations go out to Michael, Matt, Kate, and Shannon for winning this month’s Program Manager’s Picks Contest. We hope you will join us for the February 26 World Premiere of Subatomic: The European Organization for Nuclear Research, the fifth and final episode of The Invisible Photograph video documentary series! Instructions for redeeming your free admission to the event will be coming your way soon.

Thanks to all of you, December and January were record-setting months for online submissions. Melissa Catanese and Ed Panar, the artists who conceived of the project, are now busily combing through your submissions, selecting images and stories to feature in their A People’s History of Pittsburgh photobook. This book, which will be co-published by Carnegie Museum of Art, will debut in May 2015 and be available for purchase in limited edition. Stay tuned to see if one of your submissions made the cut, and to find out how to purchase one of these photobooks for your very own!

I have particularly enjoyed preparing this Snapshots post because some of my all-time favorites in our growing digital archive were submitted within the last month. Near the top of the list is this photo booth strip from Kennywood in 1973, submitted by Lisa Toboz and featuring her parents a few months before they got married.

For the non-Pittsburghers out there, Kennywood is the beloved local theme park that is as much a part of the city’s history as the steel industry. (And if you haven’t yet ridden the Thunderbolt, you’re missing out. I remember counting the inches until I was tall enough to ride. It remains the best wooden roller coaster experience I’ve ever had.) Interestingly, Toboz’s Kennywood picture from 1973 was joined this month by two other Kennywood pictures, coincidentally from exactly ten and 20 years later. These two, submitted by MaryBeth Takacs and Mike Suley, are just good, old-fashioned, solid-gold fun.

Another favorite theme for me that appeared this past month was that of “nostalgia for mothers with newspapers in the 1950s.” I’m not kidding. Just take a look at these two submissions and you’ll see what I’m talking about:

Sumac Street in McKeesport, October 1956. Submitted by an anonymous user.

I was also particularly struck this month by the number of submissions we received from the 1920s. These pictures are impressive for their longevity as well as their compelling content. I love this one, a dizzying submission from Frank Miklos that shows his grandfather repointing the bricks on his home:

Similarly, Emily Stimmel’s photograph of her great-grandfather outside his butcher shop in Wilkinsburg in the 1920s is just perfect, from the studiedly casual poses of the butchers to the old-fashioned window dressing and typeface on the signage. Carolyn I submitted a photograph of a boy on a pony from the same decade and wrote, “Apparently, someone used to come around with ponies and you could pay for a ride (and take a picture).” Wish they did that in my neighborhood.

Finally, it seems that Pittsburghers have a thing for posing with cars. Everyone from Pittsburgh legend Rick Sebak to users Don Privett, Bridget Doyle Fink, Frank Miklos, and Timothy Moore uploaded photographs featuring family members inside, in front of, leaning against, or crouching next to a family vehicle. Is it a coincidence that four of these five submissions were from the 1940s, a time of remarkable state and federal highway expansion? I’m willing to bet that as soon as we start seeing A People’s History of [fill in other city names here], we will see similar poses by citizens from across the country, all of whom captured the increasing American love affair with the automobile on film.

Ever wondered about the ways our ever-present digital technology might be changing how we humans experience empathy?  Do emoticons and emojis really mean more to us now than physical human contact? Antoine Catala: Distant Feel, the first commission of the Initiative’s Orphaned Images project, asks us to engage with these questions. Opening Saturday, February 14 in the Forum Gallery, the exhibition asks us to confront the ways we engage with each other in a largely digital world and challenges our assumptions about the relationship between image and emotion.  It’s open until May 18, so make sure you stop in and check it out!

Go behind the scenes with us on February 26 to investigate how photographic technologies visualize the subatomic world. Enjoy custom cocktails, lively discussions, and a chance to meet CERN scientists!  Buy tickets here.

May 9: Now See This Closing Party!

Join us for Now See This, a closing party at the museum that will feature musical programming in partnership with VIA and an immersive digital experience or two that could feature YOUR submissions to nowseethis.org. Save the date on May 9 for a celebration of the first cycle of the Hillman Photography Initiative. Stay tuned for more information.