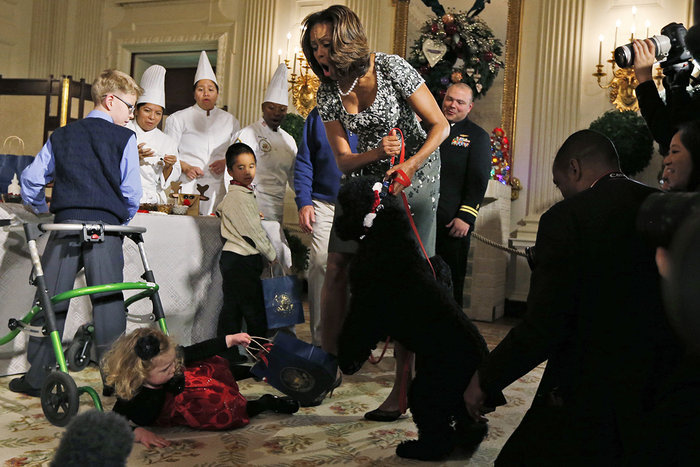 I find it ironic—and more than just a bit curious—that this month’s This Picture photograph, chosen because it went viral just a year ago, netted a record low in public responses on nowseethis.org.   Figuring out what’s going to go viral is a billion dollar industry, full of experts well-versed in the latest trends and sporting the technological skills to build The Next Big Thing. But, as history has shown us time and again, the public is fickle. Companies that spend millions to draw the public’s attention and set the world on fire with something sparkly or snazzy end up losing out to someone’s home video of a cat playing a piano.

This month’s photograph of First Lady Michelle Obama at the 2013 unveiling of the White House’s Christmas Decorations was a surprise entry into last year’s most-viral-photographs competition (I’m pretty sure I made that up, but I’m just as sure that all those well-versed and skillful experts keep tabs on things like that). As Marco Bohr discusses in his featured essay response to this photograph, an unexpected, unscripted moment in an otherwise carefully choreographed and staged event can sometimes equate to solid gold, as it did for photographer Charles Dharapak and the Associated Press.

So, when we found ourselves with fewer responses to the project this month than ever before, I found myself ruminating on the following:

I certainly don’t have definitive answers, but I do love the debate. And I particularly enjoyed the responses from users Tonilyn and April to this month’s This Picture selection, both of which hone in on the unexpected, unscripted, and in this case humorous “it” factor that makes an image say more than it otherwise could.

Congratulations, Tonilyn and April, for being this month’s winners of the Program Manager’s Picks Contest! Instructions for redeeming your award, which is free admission to the February 26, 2015 World Premiere of Subatomic: The European Organization for Nuclear Research, the fifth and final part of our The Invisible Photograph video documentary series, will be coming your way soon.

When reviewing this month’s submissions, I found myself captivated by edges. My favorite photos from November include edges and sometimes even borders, along with some shadowing that hints at a slight curl or bend in the support. I’m not quite sure why I love these details so much; perhaps it’s because these edges show these photographs as objects. In our increasingly digital world, seeing photographic prints that really lived, prints that were held, treasured, shared, and loved, invites me to imagine the larger context of the image and deepens my emotional connection to its content (something that I think the artist Joachim Schmid might agree with).

The three photographs from November that stand out for me on this front are Deanna Mance’s photograph titled “Victor with harmonica” from January 2, 2008. The caption reads: “This is Victor Navarro. Singer, songwriter, artist, writer, and a loyal friend”:

David Oresick’s photograph of his mother on Pittock Street in 1974, captioned “My mother as an aloof babe. I love the smirk and the wire cutting across the frame behind her”:

Dan Wetmore’s photograph from Mt. Lebanon in 1973, captioned, “My grandfather does this every Xmas. He is still alive”:

This last one, also submitted by Dan Wetmore, has no date, location, or caption, but it’s probably one of my all-time favorite photographs for A People’s History, from the angle and framing to the posture and facial expression. What a capture!:

I have to say that keeping up with all of these fantastic submissions each month is one of my favorite parts of the job. Many thanks to all of you for sharing your family, your history, and your lives with us through this project. It really is such a treat!

Last week, we went public with our press release on Orphaned Images, the final project to release as part of the 2014-2015 cycle of the Hillman Photography Initiative. This project is comprised of two artist commissions—Antoine Catala and Shannon Ebner—and explores questions raised by the increasingly widespread digital dissemination of photographs. Catala’s commission will debut as an exhibition in the museum’s Forum Gallery in February 2015, while Ebner’s commission will take shape as a book, to be published by the museum in mid-2015. Stay tuned to our website for further information as these two exciting projects take shape!