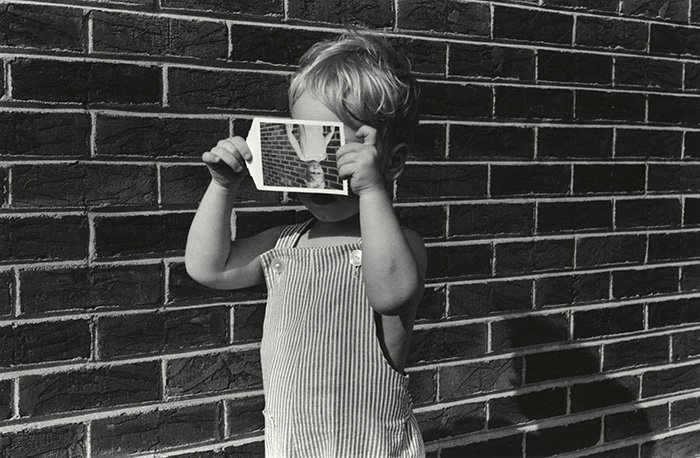 I love Stephanie Flati’s photo response to this month’s This Picture, which is a snapshot by Kenneth Josephson of his son, Matthew, from 1965. The subject of both Stephanie’s and Josephson’s pictures is a young boy whose face is obscured by the paraphernalia of photography; in Stephanie’s case an enormous lens and in Josephson’s, a snapshot. On the surface, both reflect a childhood fascination with imaging technology with which any parent who has struggled to remove a smartphone camera from his or her child’s hands will be familiar. On a deeper level, both seem to me to hint at a subconscious search for self through photographic representation. In her powerful essay, Nancy West, author of Kodak and the Lens of Nostalgia, dives into the visual Mobius strip of Josephson’s image and raises compelling questions about photographic authenticity and the search for meaning that also echo for me in Stephanie’s response, albeit in a different way.

Like Stephanie’s, many of your responses this month similarly took visual cues from Josephson’s image above, including photographs of or inside other photographs. Coincidentally, these responses also remind me of some of the sequences of celebrated photographer Duane Michals, whose retrospective, Storyteller: The Photographs of Duane Michals, just opened at the museum (and if you haven’t yet made plans to come and see it, I urge you to do so). My favorite This Picture responses from this month, along with Stephanie’s response above, are from Karen Melvin, Chantel Paul, and Z Liu.

Congratulations to Stephanie, Karen, Chantel, and Z Liu! You have won free admission to the February 26, 2015 World Premiere of Subatomic: The European Organization for Nuclear Research, the fifth and final part of our The Invisible Photograph video documentary series! Stay tuned for information on how and when you can redeem your prize.

Submissions continue to pour in for A People’s History of Pittsburgh, our online collective photo album by and for the people of Pittsburgh. The two that have stuck with me this month for the strength of their formal composition, as well as the beauty of their accompanying stories, are by Karen Burger and Justin Visnesky.

The caption that accompanies Karen’s historic photograph is full of emotion and reminds us how photographs can nurture and sustain deep personal connections to a place that has long since succumbed to the passage of time. She writes: “My grandfather came to this country in 1905. He drove a streetcar, saved his money, and purchased this property, as well as the property on both sides of the street. He was very proud of his name and always said, in his Irish brogue, ‘Don’t ever let that name come down from there’. He would be very sad today that it has been gone for many years. We lived upstairs and all my grandmother’s relatives lived in the surrounding buildings. I loved the days spent listening to their stories and hearing their wonderful laughter. I adored my grandfather, as well. He called me his ‘wee Darlin.’ These memories will live in my heart forever.”

Justin’s beautiful photograph similarly captures a transitory moment in his family’s history that continues to resonate with him today: “My dad took this photo of my mom canoeing on the Clarion River. This was 2 years before I was born. I can’t get over how much my sister looks like my mom did back then.”

If you have any photographs or stories of Pittsburgh that you haven’t yet shared, please consider contributing them to our project before December 31, 2014. Melissa Catanese and Ed Panar, the Pittsburgh-based artists who conceived of this project, will be selecting their favorites from among your digital submissions and will ultimately print them in a photobook, forthcoming in 2015. Make sure your Pittsburgh story joins the digital archive by uploading it here.

Don’t have a scanner? Join us for our next Scanning Day at the museum on Saturday, November 15. Anyone arriving at the museum with a photograph to scan will receive free admission to the museum that day!

What do photography and particle physics have in common?

More than you might think, it turns out. The fifth and final episode of The Invisible Photograph documentary series, Subatomic: The European Organization for Nuclear Research, premieres at the museum on Thursday, February 26, 2015. So save the date! And get ready to explore the Atlas Detector—the world’s biggest digital camera, housed at CERN, one of the world’s foremost institutions for scientific and technological research—and learn about experiments that use photographic emulsion to decode the behavior of anti-matter. Tickets coming soon!