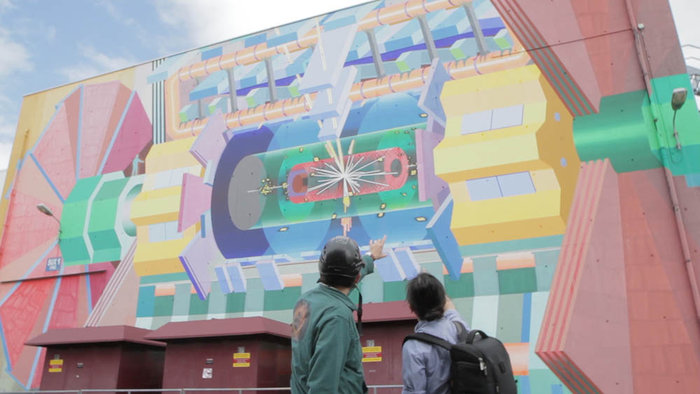 Go behind the scenes with the Hillman Photography Initiative to investigate how photographic technologies visualize the subatomic world at the premiere of Subatomic: The European Organization for Nuclear Research—and enjoy custom cocktails, lively discussions, and a chance to meet CERN scientists!

Photography and the world’s most advanced particle physics research collide at the European Organization for Nuclear Research (CERN) near Geneva, Switzerland. At CERN, scientists use photographic technologies, both old and new, to probe the fundamental structures of the universe.

One of the most exciting scientific discoveries of the past century, the detection of the Higgs Boson, was captured with the aid of the ATLAS Detector, the largest digital camera in the world. Elsewhere on CERN’s campus, traditional photographic emulsion is being used to conduct one of the world’s most sophisticated anti-matter experiments. The Invisible Photograph film crew gained extensive access to the facility, including the ATLAS detector, situated 100 meters underground, and the Antiproton Decelerator hall, one of the go-to places for experiments involving anti-matter. Subatomic delves into these experiments to explore how photography can decode subatomic behavior at one of the world’s most advanced centers for technological innovation. Key interviews include Michael Doser of the AEgIS experiment, Neal Hartman of the ATLAS detector, and Ariane Koek, director of CERN's artist residency program.

After the screening, we’ll introduce our special guests Neal Hartman and, via remote access, Michael Doser, who join series creative director Arthur Ou for a discussion with the audience on the ways that arts and sciences can inform and catalyze one another.

Subatomic: The European Organization for Nuclear Research is part of The Invisible Photograph, a five-part documentary series investigating the expansive realm of photographic production, distribution, and consumption by way of the hidden side of photography, whether guarded, stashed away, barely recognizable, or simply forgotten.