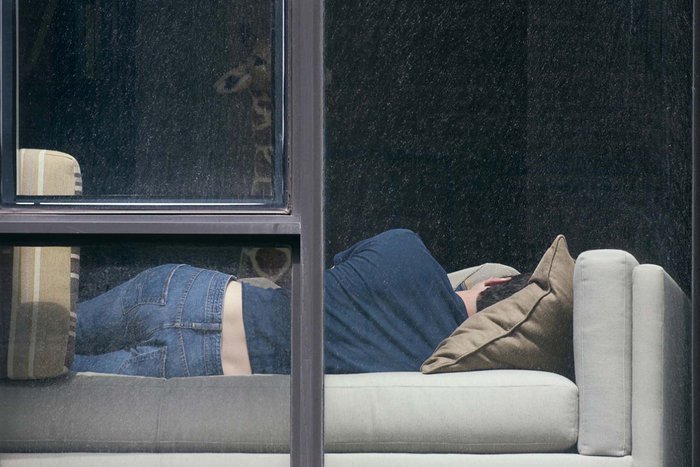 Last month, This Picture asked you to consider a photograph from Arne Svenson’s series, The Neighbors. Taken without the subjects’ permission and shot with a long lens, these photographs of people in their private residences garnered widespread attention because of the lawsuit filed against the artist for alleged invasion of privacy.

This month’s responses did indeed explore the tension between public and private, but they also in equal measure injected a healthy dose of levity into the conversation by focusing on the partially obscured, slightly surreal, and completely compelling giraffe. I must admit, when we selected this image as one of our This Picture features, not one of us predicted the draw of “the giraffe factor.” Live and learn.

My favorite responses from this month highlight both the lighthearted, emotional reactions to the photograph as well as the intellectual considerations of voyeurism and privacy violation (which Pete Brook reviews so well in his own response, “The Prying Eye of the Public Lens”). I’m delighted to announce that September’s winners of the Program Manager’s Picks contest are:

Congratulations Jake, Matt, Christina, Quinn, and Anushya! Your prize is free admission for you and a guest to the World Premiere of Subatomic: The European Organization for Nuclear Research, which is Part 5 of The Invisible Photograph documentary series. It’s scheduled to premiere in early 2015 – stay tuned!

On September 19, we welcomed artist Joachim Schmid and Hillman Photography Initiative Agent Arthur Ou to Carnegie Museum of Art for the world premiere of Discarded: Joachim Schmid and the Anti-Museum, Part 4 in The Invisible Photograph series. After the screening, we heard Arthur and Joachim talk about everything from the networked image to urban archaeology then joined them for a post-screening party in the museum. It was a wonderful night and exciting to see so many of you there, including April Ragland and Becka Wright, past winners of the Program Manager’s Picks contest!

One of my favorite submissions this month was from Mike Suley, who has contributed a truly impressive number of photographs to our growing online archive.

The caption reads: “That’s me riding shotgun in a Wilkinsburg Paddy Wagon. For some reason I had my mother’s Instamatic camera while out with my friends that summer evening. I asked the police officer if he would take a picture of us in front of the vehicle at the corner of West Street and Biddle Avenue. He told us to get inside and turn the lights on and he took the photo. When we were finished, he got serious and said, ‘Now you kids behave. It’s late.’”

And this photograph (pictured below) has to be mentioned, if only for the wonderful Myron Cope anecdote: “If you followed the Pittsburgh Steelers in the 70s winning Super Bowls never got old. Some of us attended a Steeler rally after we won our third title in 1979. There was talk of a football dynasty. There were thousands of fans in very cold weather listening to all the boring speeches by the politicians. At the end it was Steeler broadcaster, Myron Cope, who electrified the crowd. He raised his right arm with his palms out and said, “Repeat after me…All Hail the Emperor Chas” The response was deafening. He repeated the phrase a couple more times. Chuck Noll was now the leader of the Steeler Nation from that moment on. The nickname stuck. The photo shows Myron with his terrible towel resting on his right shoulder. And right behind the towel is the chief, Mr. Rooney.”

This last feature is one of my favorites because you can see the evidence of its history and age in the scan:

The caption to this photograph, dated 1956, reads, “My love of bicycles began here.” Unfortunately, the creator chose to remain anonymous, so I am unable to shower him or her with commendations on the beautiful and clearly well-loved image. Thank you for sharing this photograph and please consider revealing your true identity in the future!